Welcome to our sightings page! Here you will find the most detailed and accurate accounting of the type and quantity of whales and dolphins we’ve seen off Newport Beach, from the Trip Logs of our boats. We are meticulous about our data being gathered and reported accurately, as we cooperate with marine biologists to evaluate the trends observed in our local waters. Honest accounting is important to us, so that’s why we break down for you the sightings made by each trip, with the actual number of animals confirmed. Sometimes we have to estimate the numbers of dolphin, because there are just so many!

Our busy weekend on the water was capped off with super awesome Offshore Bottlenose Dolphin encounters, like this moment captured by @seataceans . We also saw thousands of Common Dolphins, a Humpback Whale, and Minke Whales! 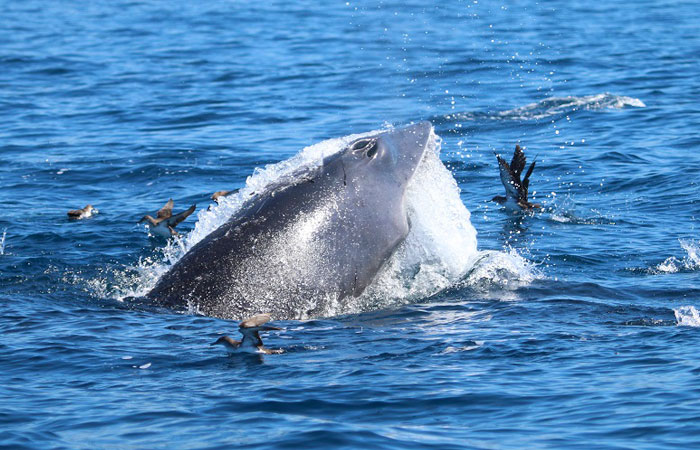 The smallest whale in the Northern Hemisphere, the Minke Whales we see are typically the size of our boat, from 20 to 25 feet long. They can be spotted year around, and feed on krill and anchovies. While they have a reputation for being shy and hard to track, sometimes they will make jumps or come to investigate the boat. Just another whale species to check off your list, at times abundant here off the Orange County coast. 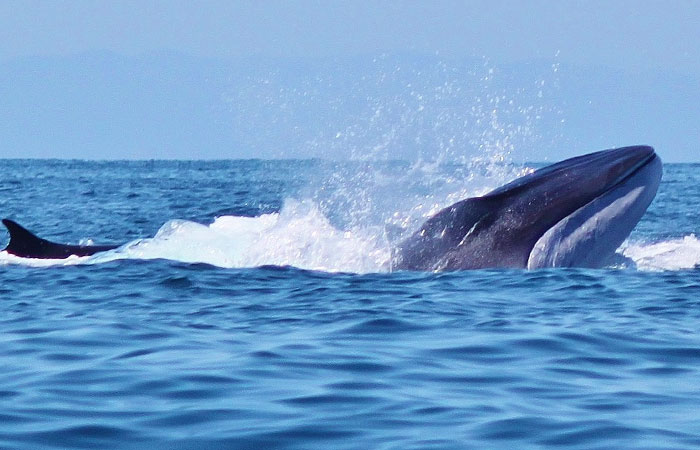 You might be able to watch a fin whale any month of the year off Newport Beach, but it seems the Spring time is best. These big animals are at times even more boat friendly than the blue whale. On multiple occasions, we have had them swim circles around the boat to check it out. They also are seen in social groups off Orange County more than their big cousin, the blue whale. They rarely show their tails or jump, but are remain impressive in their size and striking in their dark color. 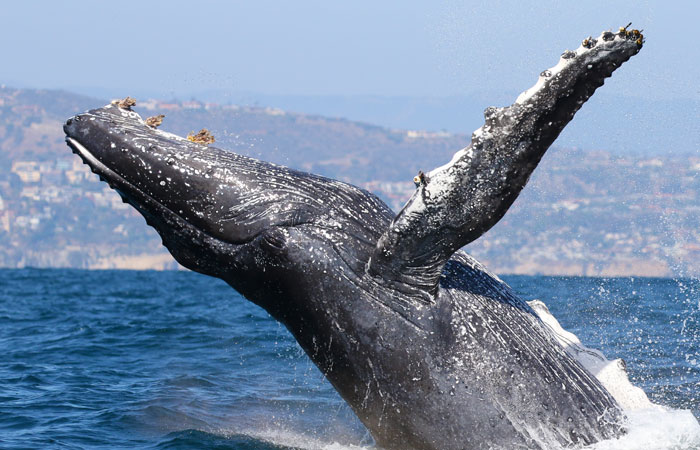 All around, probably the “best” whale to watch! Humpbacks are shows offs: big, gregarious, and they love to breach! Again, possible to view any month of the year, but feeding is concentrated May through November. Their source of food is anchovies, which have been in great abundance off of Newport Beach in recent years. 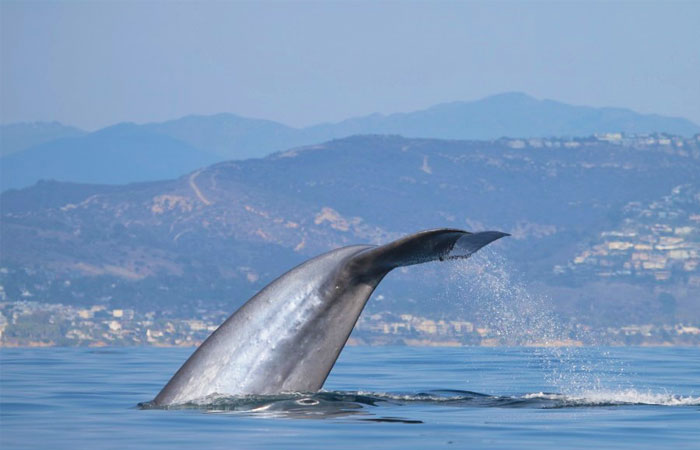 The heaviest animal to ever live on planet earth(up to 200 tons) feeds off Newport Beach May through October. In California waters, they average about 80 feet long, but are known to reach over 100! The population that frequents the West Coast of the United States stands at about 3,000 whales, which isn’t too far from it’s historical size. On a really good day in the summer, we might see 5-15 individuals feeding on krill off of Orange County. Blue Whales require patience, because their feeding dives can last upwards of 10 minutes. However, waiting is rewarded because when they surface again, they move very little and allow us to get close looks. Having evolved without predators, the blue whale is quite tolerant of approaches by boats. It wasn’t until the past few decades that Blue Whales were sighted with consistency off Newport Beach. These days, it’s one of the best places in the United States for Blue Whale Watching!

The mainstay of Southern California whale watching, Gray Whales can be counted on to pass through the waters of Newport Beach faithfully as they make the longest migration of any mammal on earth! The 12,000 mile round trip from their summer feeding grounds off Alaska to their winter breeding grounds in Mexico makes for excellent viewing December through May. In the spring time during the northbound migration, Newport Beach becomes a playground for mom and baby whales as they stop to rub themselves on the sandy bottom just yards from the shoreline.

This species is the biggest dolphin we typically see off of Newport Beach. They are the same type featured in the TV show “Flipper”: Gray, friendly, and some of the smartest animals in the ocean! There are actually two sub-types of bottlenose in our waters. An inshore variety is seen almost always within 1,000 feet of the coastline and occasionally in the bay. These bottlenose are in smaller pods of 2-10 animals and typically aren’t the most boat friendly dolphin, the reason being due to their proximity to shore boats just don’t elicit a “special” reaction because they see them every day. On the other hand, the offshore bottlenose dolphin travels in larger groups of 8-50 and can be a LOT of fun to watch! They love to jump, play in the wake, and surf the bow of our boat. You can often touch them while leaning over the side. 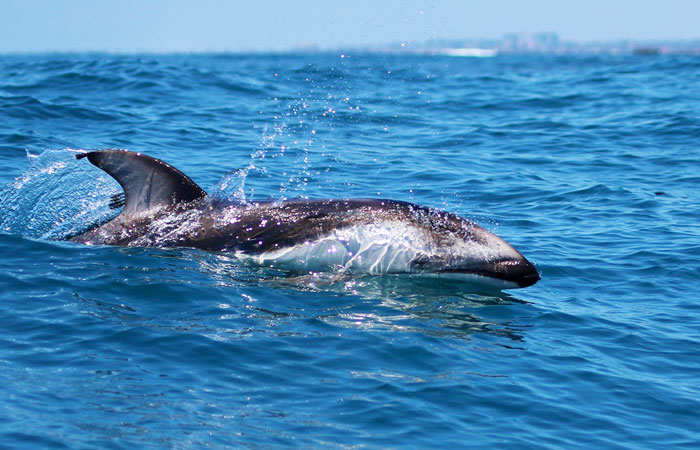 Male Pacific White-side Dolphins weigh up to 440 pounds and females weigh up to 330 pounds, and the males get up to 8 feet in length while the females are smaller, at about 6.5 feet in length. Whale watching in Southern California, patrons may also have an opportunity to view the colorful Pacific White-sided Dolphin. The coloration on Pacific White-sides is beautiful from black to white and all the grays in between, definitely the most intricate patterns. These dolphin are easy to distinguish by the sharply hooked dorsal fin and blunt snouts.

Last but certainly not least, are the common dolphin! “Commons” are our year-around staple off Newport Beach, and it’s a shame their name describes them so generically and boring. These are super special animals, almost ALWAYS eager to play with our boat, appearing in the largest groups, and available to see almost every day of the year! The average sized pod of common dolphin is about 50 animals, but its not “uncommon” to see 200 or 300, even 1,000 in a group. They are superb jumpers and swimmers, always impressing us with their agility and playfulness. 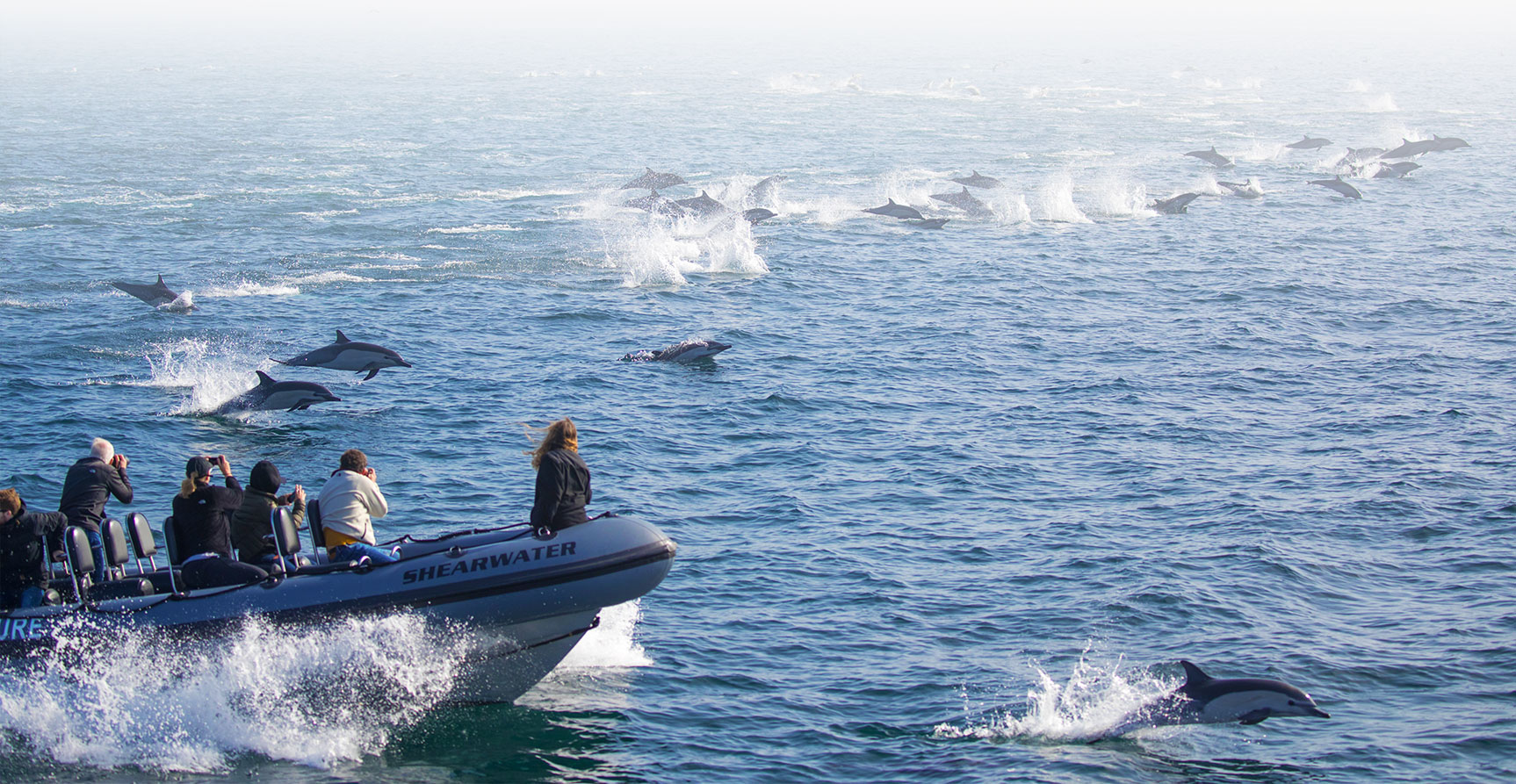 Information about Whale and Dolphin Sighting Seasons off Newport Beach:

There’s a reason why Newport Beach is such a productive location to try whale and dolphin watching. The underwater canyon and shelf that is present off our coastline causes an eruption of food chains, starting with with plankton to small fish, which whales and dolphins feed on all year long!

Just like on land, the ocean has its seasons, and we’ve put together this helpful Sightings Calendar to help show the seasonal variability of whale and dolphin species off Newport Beach.

One of the things you will notice right away is that sightings of two species of dolphin, the Common Dolphin and Bottlenose Dolphin, are always ranked “Best” or “Good.” Southern California can easily be considered one of the dolphin capitals of the world, with scientists estimating the local abundance of Common Dolphin at well over 1 million animals!

We also have “Best” or “Good” rankings for 5 commonly sighted baleen whales, with various times of the year being better for each species. Over 20,000 Gray Whales migrate along the California coast from December through May, and so we’ve ranked those months as being the “Best” for that species. Giant Blue Whales, the largest animal on earth, visit Newport Canyon to feed during the late Spring and early Summer, when strong upwelling contributes to an abundance of krill in our waters. Humpback Whales feed on anchovies in the coastal waters of Orange County as they move between Mexico and California; typically sightings peak in a barbell fashion during the Spring and the Fall.

One thing’s for sure in Southern California, you never know what you might see on a whale watching trip. Rare encounters of Sperm Whales, Killer Whales, Sei Whales, Pilot Whales, Bryde’s Whales, and False Killer Whales have all been seen multiple times on Newport Coastal Adventure. Very few places in the world can boast of such diversity in sightings of whale and dolphin species.

Lastly it is important to remember, the ocean is a huge and wild place. Whales need to eat thousands of pounds of food per day. Sometimes currents shift, placing their food elsewhere, and we do experience periods of slower sightings now and then. It’s important to bring along a mindset of being on a “quest” for sightings, not an expectant “guarantee.” One thing we can guarantee, is that we will try our absolute hardest to give you the best trip possible with the conditions that the ocean gives us.